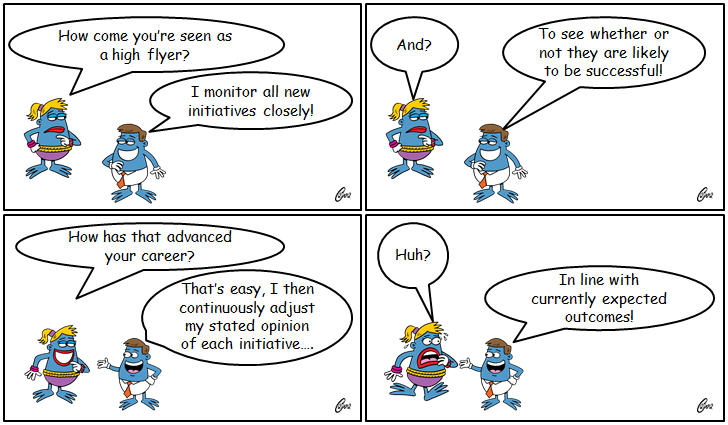 Just Who Really Is Performing Well?

In a previous blog post, I covered the importance of carefully designed new hire induction processes that retain each individual’s motivation by delegating to them in line with their skills and knowledge. In many organizations however, there is a significant lack of understanding when it comes to employee motivational priorities and a large difference between an employees’ perceived performance and their true level of contribution.

As I discussed in my blog post describing the Hysteresis Loop, managers’ opinions of their subordinates often lag well behind their current levels of performance. This problem is pervasive even in the case of long-serving employees and with new hires, it is exacerbated.

As a result, all too often managers fail to induct new hires properly. By studying data generated through the deployment of evidence-based recruitment and management development processes, it has become apparent that this failure is one major cause of high levels of employee turnover.

In another blog post covering the Multiplier Effect, I described how employee retention problems typically bifurcate organizations into a core area of long-serving employees together with one or more pockets of high employee turnover. I also showed how, within these pockets, employee turnover can be much higher than is generally realized and how even relatively small pockets can be the cause of significant bottom-line problems. 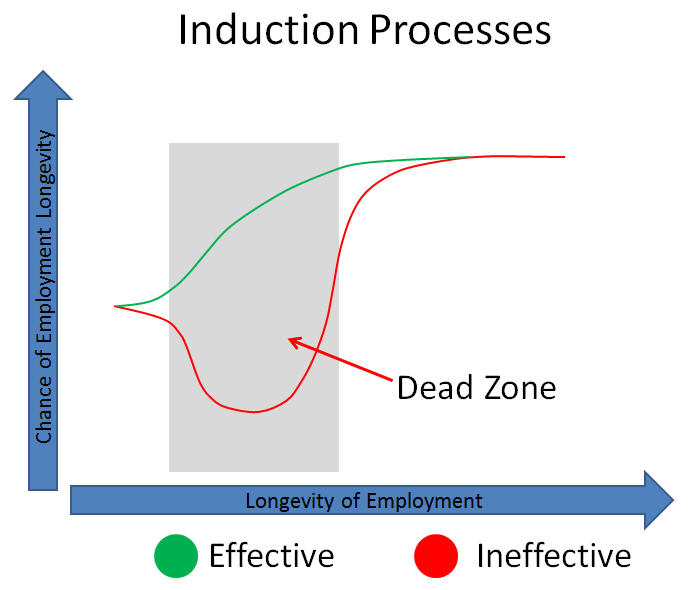 By undertaking a serial analysis of employee start and end dates, it is possible to build a picture showing how the areas of long-serving employees and pockets of high employee turnover change over time.

Doing this, we have discovered that poor induction processes frequently lead to a Dead Zone. (see picture)

Each organization’s overall level of employee turnover pre-determines the average chance that a new hire will go on to become a long-serving employee. Where effective induction processes are deployed, this chance increases as time goes by. However, where ineffective processes are used, the new hire’s chances initially drop and the individual enters a dead zone in which there is a greater chance that they will not go on to become a long-serving employee.

Through the deployment of the Talent Chaser Performance Appraisal and Task Action Planning Module, organizations have been able to eliminate the dead zone. To achieve this, each new hire has to be given an induction appraisal in which key tasks are identified and set as initial targets. During the first week of employment, this needs to be reviewed every day. During these reviews, particular attention needs to be given to:

(1)  Discussion of each task

(2)  Sharing of opinions between supervisor and new hire

During the next two weeks, if the new hire is making good progress and appears to be well motivated, this review can be undertaken every other day. Supervisors who have an open door policy have greater success inducting new hires and encourage them to discuss problems when they arise.

At the beginning of the fourth week, it is vital to discuss how the job is shaping up against the employee’s original expectations. It is frequently, at about this time, that the new hire transitions from being “new” and therefore given special treatment, to being the same as other employees. This period of time is critical because, when it comes to new hires, supervisors have a tendency to expect too much too soon.

Leadership is 90% persistence. During the first few weeks of a new hire’s employment, their supervisor will need to repeat their instructions and reminders many times. It turns out that many supervisors lack the natural persistence necessary to “nudge” the behavior of a new hire into that required for acceptable performance. Because of this, it is not at all unusual for a supervisor to:

Focusing on how the job compares to the new hire’s expectations, forces the supervisor to look at things from the new hire’s perspective. Done properly, this can result in a number of positive steps all of which will increase the chances that the individual will go on to become a long-serving employee:

Realignment processes of this kind then need to become part of the ongoing way in which the supervisor manages both new hires and pre-exiting employees. In the process, the supervisor will not only increase their chances of success with new hires but will also become much more aware of the skills/knowledge and actualcontribution of each team member. Data generated through the deployment of Talent Chaser indicates that supervisors who follow these simple rules go on to build teams of long-serving and highly-skilled employees. As a direct result, productivity and talent retention can both improve.