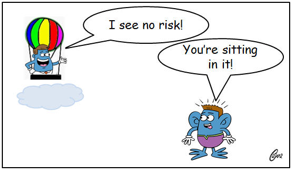 The hysteresis effect describes how managers typically cling to outmoded stereotypes. Because of this, as the performance of individuals reporting to them changes, they often remain unaware of this until these changes become extreme.

One effect of this is that managers often fall prone to the ‘last-minute’ syndrome in which they suddenly become completely dissatisfied with a subordinate.
THE 80:20 RULE1

The data within Talent Chaser’s behavioral database indicates that, when a subordinate’s performance falls, it does so quite quickly. Because managers typically cling to powerful pre-existing stereotypes, they often remain oblivious to serious performance issues until they become extreme.

One important consequence of this is that, by the time the manager does become aware, a whole series of problems have taken root. Managers then find themselves spending 80% of their time dealing with problems caused by the 20% of poor performers in their team.

Upstream managers at the skip level are typically less vulnerable to pre-existing stereotypes of people working lower down in the organization. They often remain more objective when it comes to the performance of individuals reporting to their downstream managers. Talent Chaser’s skip-level controls enable skip-level managers to intervene without breaking the manager-subordinate chain of command.

Skip-level facilities within Talent Chaser form part of an evidence-based platform that enables management to ensure that all processes within the organization are subjected to ongoing and rigorous reality checks. Using these techniques, not only can ensure that the ‘last-minute’ syndrome become a thing of the past, but also as managers are freed from the constraints of the 80:20 rule, they are able to devote more of their time to the development of team members with high-flyer potential.

At the lower levels of an organization, obeying instructions frequently results in better performance ratings than using one’s initiative. Stereotypes harden accordingly. As a result, individuals whose performance merits their selection for career development are often overlooked. These people often find themselves forced to move on to a new organization where they can establish a new stereotype and be quickly accepted as a high performer. Data collected through Talent Chaser shows that the Performance Appraisal system radically improves the retention of individuals with high performance potential.

Stereotypes can often hold back the career development of a potentially high-performing employee. Additionally, the data collected through the deployment of Talent Chaser evidences the fact that upstream managers are often better placed to identify high-flyer potential. The methodology promoted within Talent Chaser, encourages each upstream manager to become much more aware of what is happening throughout their entire downstream. When this happens, career and succession planning processes are radically improved and a greater proportion of high flyers are retained.

Talent Chaser integrates quarterly performance appraisal with task action planning into a process that encourages managers to confront performance issues early on. It turns out that individuals who want to perform well also want to develop a clear understanding of any limitations in their performance. The deployment of Talent Chaser not only results in a significant improvement in the retention of high performers, but also helps managers bring such people to peak performance. With Talent Chaser deployed, accountability and motivation go hand-in-hand.

In the real world, nothing remains constant. What worked yesterday may well need changing for tomorrow. Talent Chaser is the world’s first truly evidence-based HR management tool that automatically adapts to the changing environment. Powerful neural networks and genetic algorithms in the system enable it to modify HR processes in line with current organizational needs. Use the contact details below to find out how you too can benefit from the deployment of Talent Chaser within your organization.