How to Communicate Effectively 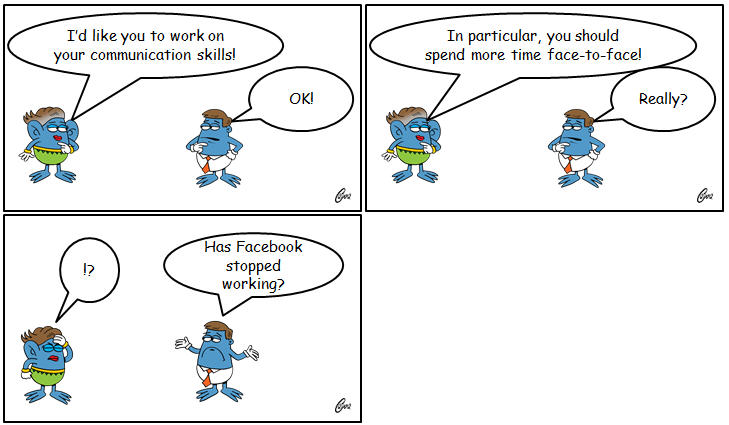 In my blog post on Setting Targets and Feedback Control, I described how effective organizational communication not only helps responsiveness but also organizational stability. In a subsequent blog post, The Listening Paradox, I described the unique role played by effective listening and, in doing so, referred to the feedback control concepts of Gain and Damping and showed how the creation of a listening organization promotes responsiveness without over-reaction in times of change. In this blog post, I’m going to be discussing the pros and cons of social media in terms of its potential impact on organizational effectiveness.

With the advent of social media, each of us now has many more ways in which to communicate with each other and yet surprisingly it turns out that the quality of this communication may not be so great. Not that many years ago, much of the way in which we communicated was face-to-face. This had its drawbacks to be sure but it also had some significant advantages. The truth is that people are much more likely to listen to people they like. When it comes to effective communication between people therefore, the relationship does still matter.

Years ago, the child psychologist Jean Piaget, described the difference between monologue and dialogue. It turns out that relationships tend to build more quickly and more effectively where there is adequate opportunity for dynamic dialogue. The fact is that for all of its advantages, social media lacks this vital component. Communication within social media can be usefully thought of as a halfway house between monologue (in which the participants talk but don’t listen to each other) and face-to-face discussions in which both the full array of verbal and non-verbal communication cues are deployed and listening is more likely to take place.

Anyone who visits Facebook, for example, has to be struck by the fact that it contains an uneasy mix of the serious with the relatively trivial. Additionally, communication is serialized. One individual posts something and sometime later someone else posts a comment. Much of what is said may elicit no comment whatsoever.  The participants pick and choose both the subjects they will raise and the elements of the conversation where they will join in.

What this means is that in practice, difficult issues can be avoided. While the process possesses a strong “feel-good” factor and, on the surface, appears to promote relationship building, it turns out that this is frequently not at all the case.

Through the deployment of the Talent Chaser Performance Appraisal and Task Action Planning Module, we have learnt that, counterintuitively, strong interdependent relationships are much more likely to develop between managers and their direct reports under circumstances where employees are held fully accountable. It appears that the main reason for this is that holding an employee accountable requires differences of opinions to be brought to the surface and discussed. This process not only clears up misunderstandings but also creates empathy for the other person’s point of view.

This empathy, in turn, leads to a greater appreciation of other employees’ strengths and therefore the contribution they can make towards the challenges faced by their colleagues. It turns out that under these circumstances employees are much more likely to reach out to each other for help in times of difficulty and, unsurprisingly, strong inter-employee relationships are more likely to develop.

By promoting the development of a listening organization in which people are held fully accountable, it is possible to create an organization that is both highly responsive and stable in even the most demanding of business environments.