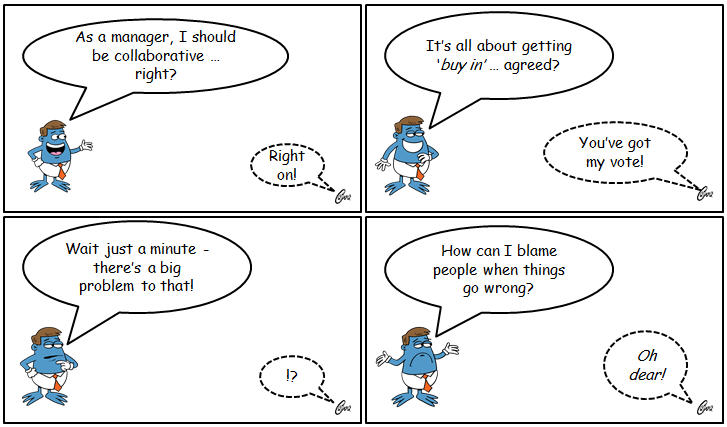 In a recent blog post describing how feedback control works and its importance to the effective functioning of any organization, I mentioned that organizations that have blame cultures are much less well able to respond rapidly to problems discovered lower down in the organization.

Through the deployment of Talent Chaser’s Performance Appraisal and Task Action Planning Module, we have discovered that one of the main reasons for this is that, in such organizations, employees are more loath to report problems. We have also discovered that there is a direct link between this and the way in which innovation is handled within an organization. Because innovation is primarily motivated through the need to solve problems and employees at the workface are more likely to see these problems at first hand, the suppression of upstream problem reporting within a blame culture both limits problem awareness throughout the organization and stifles creative thinking lower down in the organization.

By studying data generated, through the use of Talent Chaser, we have been able to identify the conditions that promote the establishment of a blame culture together with techniques that can result in its eradication. It turns out that blame cultures frequently develop where organizations fail to make a proper distinction between allocating blame and holding people fully accountable.

A moment’s thought reveals that there is a true management dilemma here. Exactly where is the boundary between holding employees accountable and allocating blame?

The Role of Feedback

To resolve this dilemma, we have to appreciate that blame cultures thrive where management fails to identify the true causes for problems. It turns out that, for the most part, problems arise for two main reasons:

(1) Mistakes – we are all fallible and therefore capable of making mistakes. Albert Einstein’s quote, “A person who never made a mistake never tried anything new.” encapsulates the attitude management should adopt when confronted with the genuine mistake of an employee.

(2) Outside Influences – it is often the case that even the best laid plans can lead to unforeseen consequences. The data collected through Talent Chaser shows that organizations which have a culture in which the identification of problems and their associated causes is encouraged and where allocating blame is avoided, frequently find that problems arise because of these unforeseen consequences.

What this reveals is that often no-one is to blame when a problem arises. In a blame culture however, because management’s first reaction is to cast around for someone to blame, the truth gets lost in the resulting fog.

Regular and properly documented Performance Appraisal and Task Action Planning will eradicate a blame culture. It does this by giving each employee proper opportunity to explain their point of view. It is usually the case that the upstream feedback managers receive from subordinates, when they undertake appraisal sessions, exerts a powerful influence over the way in which they think about and manage their staff. Additionally, the downstream knowledge and information transferred to subordinates during the process proves to be highly motivating, particularly for those employees who place making a contribution and performing well, high on their list of motivational priorities.